Confidence is something that comes easy to some, while others find it difficult to tap into their inner self-esteem – but how do we fare as a nation?

As part of our latest campaign The Confident Index, we’ve taken the 10 most populous cities in the UK to see which one appears to be the most confident and which falls at the other end of the scale.

We have conducted extensive research in a variety of categories, including body image, health, socialising, career, finance and many more, to help us determine how people in these cities compare in these areas.

We’ve awarded each city one to 10 points for each category, with one being the least confident and 10 being the most. Based on this, we’ve established which cities are the most and least confident overall. Take a look at our research below to find out more.

When it comes to feeling confident in their appearance, it seems that Liverpool natives struggle. According to our data, the terms ‘botox’ and ‘lip filler’ each have an average monthly search volume of 1,029. This shows that a significant number of people in this North West city are browsing the web for information about these cosmetic procedures, perhaps with the intention of undergoing one of these beauty enhancements in order to feel more self-confident.

Interestingly, Liverpool had a lower average monthly search volume of 364 for ‘plastic surgery’, meaning that Bristol ranks as the least body confident city.

Meanwhile, Cardiff appears to be the most confident city in this category, with the lowest average monthly search volumes across all three terms. 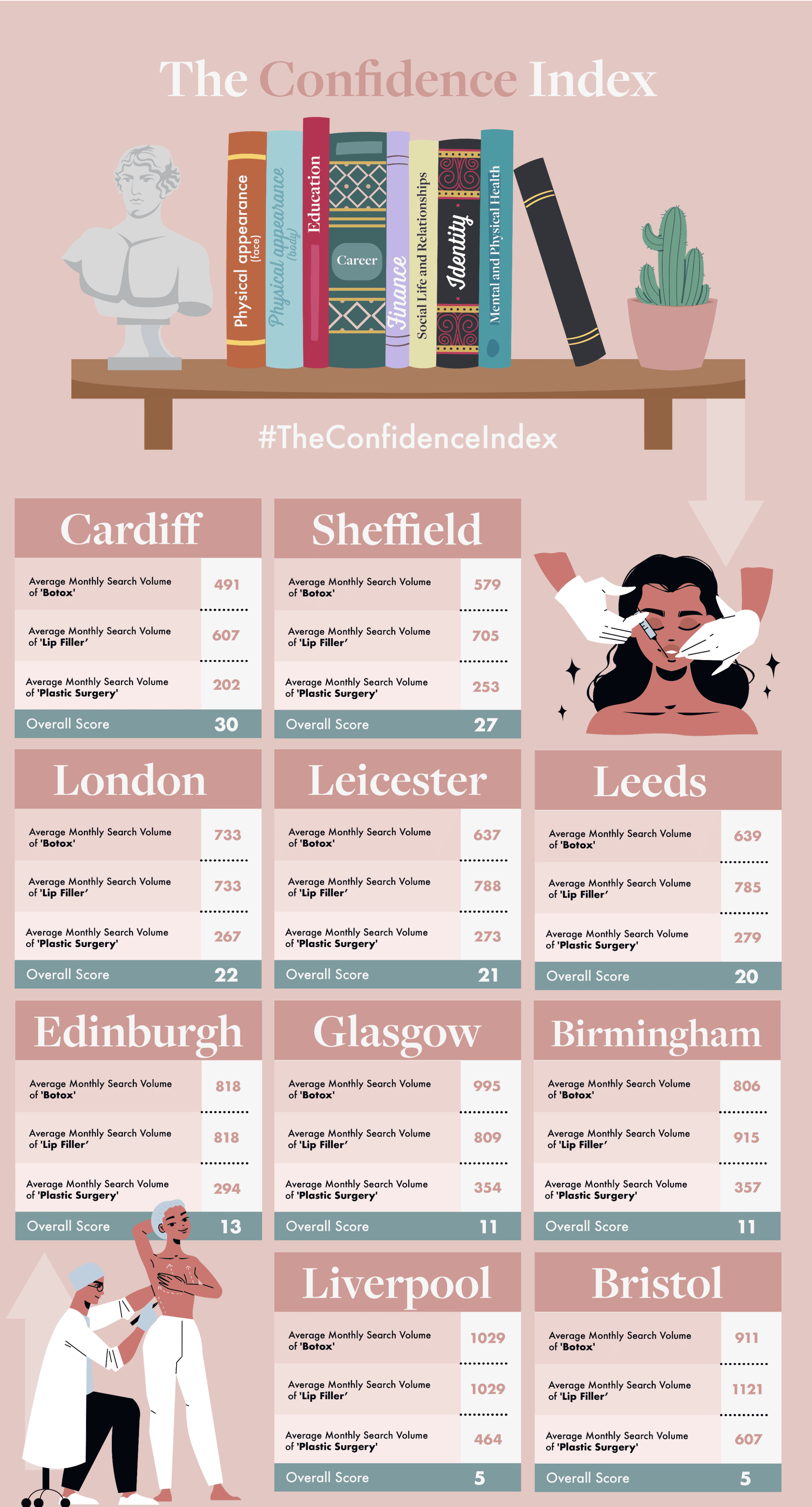 For many people, career confidence is a must as it drives purpose and provides financial security – but which cities are the most and least confident in this area?

Our data shows that Bristol has the highest average monthly search volume for the term ‘CV’ (2,335), and it also recorded the most monthly searches for ‘career change’ (327), suggesting that perhaps the people of this city don’t feel overly confident when it comes to their employment status.

In comparison, Cardiff has the lowest average monthly searches for these same terms, recording 1,127 searches for ‘CV’ and just 116 for ‘career change’. This could suggest that when it comes to jobs, residents of the Welsh capital feel secure and content with their career prospects.

However, when also taking rates of average weekly earnings and housing affordability into consideration, our data shows that London comes in top as the UK’s most career confident city.

Interestingly, our data also shows that Bristol ranks as the least financially confident city, while London comes in as the most, perhaps showing that these two categories go hand in hand.

Health and wellbeing are paramount, but which city puts mental and physical wellness at the forefront, and which is lacking confidence in this area?

At the other end of the scale, the people of Leeds scored the lowest on our confidence metric. It recorded 40 average monthly searches for ‘self help’, and 6,600 searches for ‘gyms near me’.

So which city is the most socially confident and which one struggles in this category? Edinburgh comes out on top as being the most social. We recorded that the Scottish capital has 134 bars and pubs per 1,000,000 population, in addition to 4,142 restaurants per 1,000,000 population, meaning there’s no shortage of places to socialise across the city.

And the most and least confident cities are…

So what does our research tell us? Well, when it comes to confidence, Cardiff tops the leaderboard with the Welsh capital scoring well across the majority of categories. In contrast, Birmingham is the least confident city overall, according to our metrics.

How does your local city measure up when it comes to confidence? Let us know using #HomeIsWhereTheConfidenceIs.

Explore our reviews made by real patients

Get to know our highly experienced surgeons

We offer Consultations from a number of locations around the UK

We have partnered with Chrysalis Finance, allowing patients to apply for cosmetic surgery finance for all our procedures

3 ways to book your consultation with us

Book your consultation with us today in whichever way works best for you.

Book
Call Our Private Hospital
Request a call Back